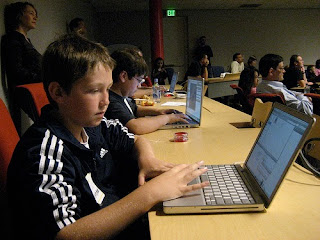 Backchanneling is a process where students converse in an online chatroom, usually while listening to a lecture or watching a multimedia presentation of some sort. We have been using backchanneling with our university students at the University of Northern Iowa. Rob Galloway talks about this on his blog. We have been using CoverItLive to allow our students to discuss what is happening in a 200-person lecture.  It has been quite effective.
Imagine my surprise when I saw Cyndi Danner-Kuhn’s discussion of back channeling It appears that she hasn’t actually done it yet, but referred to a couple of teachers who have used backchanneling in their elementary classrooms.
The first one is by “A First Grade Teacher” (I will refer to “her” as AFGT since I can’t find his/her name anywhere) who tells of using TodaysMeet as a backchannel for his/her 1st graders. The initial experience was almost accidental. She used the chat room as a brainstorming exercise and it was a huge success. Later, she had her students chat while watching an online presentation about teaching with technology. The adults involved in the process were backchanneling too, and AFGT compared the structure of the chat logs of the two age groups.  The fascinating part was the similarity that she found between the structure of the discussions of the two groups. “Both groups started out with greetings, shared many of the same concerns, and even interjected with some light-hearted exchanges between on-task discussions. “
I would like to see the chat logs of AFGT’s students.  It would be interesting to review their lines of thought and how they expressed it.  I have asked AFGT to share them, but haven’t heard back yet.  (on 8/19/10, Aviva (AFGT’s real name) sent me a link to the chat log.  Quite interesting. You should check out her comment below.)
The other example was from Sylvia Tolisano and how she used back channeling with a 5th grade class. I am a big fan of Sylvia’s. She is an extremely innovative educator. The difference between her posting and AFGT’s is that Sylvia is quite descriptive about the steps she took and the results she observed. The teacher she was helping wanted her students to use the backchannel as a way to review questions for a social science test. This is a completely different circumstance than AFGT. The teacher asked a question and all of the students could answer at the same time. Interestingly enough, the students did quite well on their tests.  Here is a comment from Mrs. Z (no relation) “I am totally amazed.  The kids took their Social Studies test on Friday and I have never seen such good papers!  I am convinced the back channeling was a major factor.”
I have never used TodaysMeet but it looks like the kind of tool I would want to use in the classroom. It is easy to set up. The discussion room can exist from 2 hours to 1 year.  It can even integrate Tweets using a specified #hashtag. It isn’t as functional as CoverItLive, but sometimes we don’t need all of that.
What do you use?  Is 1st grade too young to backchannel?  If you aren’t using backchanneling now, how do you think that you could integrate it into your class?
Z
photo:flickr.com/kevin_marks
What’s YOUR opinion?
Leave a comment and keep the discussion going.

0 thoughts on “Backchanneling in 1st Grade?”