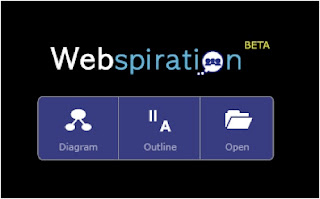 Inspiration HAS DONE IT!!!
The folks at Inspiration have developed an on-line version of their prize-winning software gem and named it Webspiration. Thinkers, large and small, have huddled around computers for almost two decades using Inspiration to help them organize and develop their ideas. They have worked alone and in groups but the limitation has always been that they could only diagram their ideas on a single computer at a time.

Webspiration elevates Inspiration to the level of online collaborative work tool. Students create an account and then can create diagrams/outlines that are saved on the Inspiration server. Having these maps online makes them accessible from any computer. This is handy for students who want to work on their diagrams at school, home and ??

Collaborative? Yes, the creator of a diagram can share it with collaborators by sending invites to friends who have Webspiration accounts. Collaborators can sign onto Webspiration and work on common diagrams whenever they are interested. Multiple collaborators can also be online simultaneously and work together on the diagram. The only limitation is that the they can’t work on the file at the same time. As the video shows, one person works as the editor and the other collaborators are spectators until the active editor passes control over to the next person in line. This makes it less collaborative than Google Docs that allows multiple collaborators to work in a document simultaneously. Is this a problem? It can be. I found that some of my students were OK with waiting in line but others became quite frustrated when they had to “holster” their creativity until it was their time to emote.

Watch this short Jing video that I created to demonstrate Webspiration in my ISTE Webinar.

Watch a larger version of this demo at http://tinyurl.com/5cnxr4 (3 minutes to download)

What’s it cost? Right now Webspiration is free! The folks at Inspiration have identified the present version of Webspiration as a Beta Version and they want you to get online and give it a try. They even provided a place where users can provide feedback (although I couldn’t find it just now when I checked the most recent version.:-)

Give it a try. Go to http://www.mywebspiration.com and try out the Inspiration of Tomorrow.