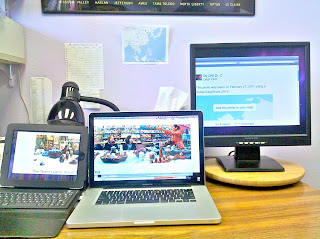 You are seeing triple screens running with my MacBook Pro without any external splitter hardware.

Cast of Characters (from the left):
–iPad I (bought 3 wks before iPad II was released)
–MacBook Pro
–Scavenged flatscreen monitor.

The flat screen is just connected using a VGA dongle to connect it as I would connect a projector to use in class.

The iPad connection is a little trickier. I found a nifty app called Air Display (relative to Air Guitar – but not).  Air Display is an app created by Avatron.  It allows you to wirelessly extend your desktop to iPad, iPhone, iPod or Mac.

You load the app on your iPad (or other i-device) and then load a computer-based version on your base computer. They even say that you can run the computer-based software on a Mac OR Windows PC.

Turn-on Air Display on your computer.
Now go to your i-device and turn the Air Display app.  You might have to play with the System Preferences on either of the computers.

Now you are connected.  Play with the Monitor Preferences Arrangements but it’s pretty easy.

Why would anyone need such an arrangement asks my secretary?

That’s not the point.

0 thoughts on “Triple-Screens on my MacBook Pro”