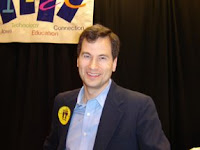 I am sitting in the Keynote of David Pogue at ITEC. Should be great. (Notice that he is wearing the UNI I.T. sticker?)

I will try to blog this by publishing the posting periodically throughout the presentation.

He started the presentation by saying “Ich Bin Iowaner”. Funny.

Just started talking about Skype. 250 million have downloaded Skype. Just noted that Skype would be a good addition to celhttp://www.blogger.com/img/gl.link.giflphones.

Palm Centro is the new treo. Has the capabilities of a Treo and only costs $99.

Just did some magic. Made the Centro disappear. Showed some magic and mentioned that he wrote Magic for Dummies (check pg 121).

Talking about the T-mobile Hot Spot @ Home. Says that can use it at home and walk away from home to a point where the coverage is handed off to a T-mobile carrier when you leave your home wireless range.

Just introduced a phone system that will ring multiple phones at the same time. It is called Grandcentral.com Grand Central gives you a special phone number. You can record multiple messages for specific people – different one for boss or wife or ??

Low price of Free. It is at They have been purchased by Google so who knows . . .

Simulscribe – Transcribes phone messages and sends them to you on your phone or through email. They also attach the recording to your email. Great idea.

Callwave – won’t do the whole message, just the important part. Showed a video of saving a message on a phone. Then shared it

Popularity Dialer – Identify the exact time of day you want your phone to ring. Ples you get a choice of the voice you want to hear.

Slingbox – $250 box to put it on your tv at home. Allows you to tune into your TV from your computer. Can watch your DVD, TV and DVD from the road. This sounds cool for the perpetual couch potato. Only problem is that it controls the TV at home so it will get in the way of your wife viewing CSI at home.
Also has a client for the Treo.

Says that Steve Jobs says that DVDs are dead.

BTW, Steve Wozniak is walking around ITEC with a UNI sticker on his black shirt.

He just finished tell us about how NetFlicks is going to start charging us by the hour. Will be able to Movie surf.

Completed with improvising some songs using a piano keyboard connected to his computer.

Pogue was having problems getting the keyboard to play. Said there wasn’t an on switch. Finally, someone went up and showed him how to turn it on.

Just sang a song about Bill Gates called “I write the Code that Runs the World Today.”

Sang one for Steve Jobs called “Don’t Cry for Me Cupertino” from Evita. It is GREAT!!!!