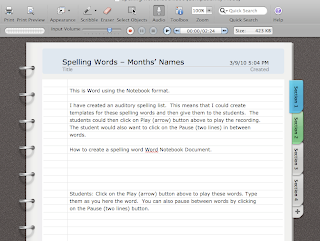 I just learned about an incredibly useful tool that is hidden in MS Word 2008 for the Mac. This is the Notebook Layout view. Looking at the image to the left, it doesn’t look too special, but looks can be deceiving.

A friend of mine was looking for a way to create an audio recorded spelling list that students could use to test themselves on their spelling words. I thought that Word had this capability but I couldn’t find it. Found my answer when I asked my technology guru, Rob Galloway. He suggested that I try the Notebook Layout view.

The Notebook Layout view for Mac Office is designed to work something like OneNote in the Windows world. It’s greatest asset is that it includes a recording capability. This means that when you open a page to take notes, you can also turn on an audio recorder. The audio recorder records the speaker and then aligns it with your notes. That means that when you return to your notes, you can click anywhere on the page and it will playback the audio track of what the speaker was saying when you took those notes.

Pretty cool, eh? But that isn’t why I am writing this posting.

I did a little experimenting and I realized that I could use this audio tool to create an auditory spelling list. The students would open the page that was designed for this week’s spelling list. They would click on the Play button and then the voice would begin saying the spelling words for the student. The student could then type the words on the page and finally check them to see if they are correct. The student has complete control to pause in between words or go back to the beginning.

Another idea: It would be an interesting idea to use this tool to create one of these pages for each of the spelling lists in a spelling book. You could then distribute these 30-page documents (one for each week’s spelling list) to your students at the beginning of the school year and they could use this each week to test themselves. (I know that this is a low-end application for technology but fits into some curricula.)

I could try to explain how this works, but I probably wouldn’t be too successful. Here is a Jing video that demonstrates how to do this.

What do you think? Do you use this Word OneNote-like capability? If so, what do you do?
Z