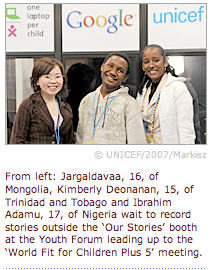 The XO computer is being used to create oral histories. I just read about this program where Google, UNICEF and OLPC are going to support an oral history program called Our Stories.
UNICEF launched this program on December 7. They launched a website www.ourstories.org where children are sharing their perceptions of their world. There are stories from Brazil, Ghana, Uganda, Tanzania and Pakistan. They say that it will soon feature children’s stories from Argentina, Ethiopia and Nigeria, and translations of the site into eight languages.

This is a miraculous project. It appears that the original stories were created in booths that were set up as part of an international trip to a children’s conference at the UN. This is a powerful opening for this project, but Google, UNICE and OLPC are trying to expand the project so that children will be able to use their XO computers record their stories and then submit them to the Ourstories project.

There is great potential for this project. I was involved in an oral history project here in Iowa back in 1995 and it changed those students’ lives. Those 5th and 6th graders interviewed their grandparents and community members about their experiences living during the period of 1920-1945. This opened their eyes (and their hearts) to the stories of their elders when they were younger. It added a whole new perspective to history. I believe that these recorded childrens’ stories will be able to provide a whole new perspective on the world. It can give the children of developing countries a voice that they never had before.