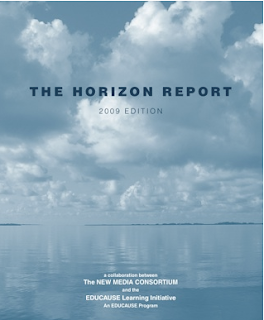 The Horizon Report for 2009 has been released.

The Horizon Report is an annual report that is produced jointly by the New Media Consortium and the EDUCAUSE Learning Initiative. This account charts the existing and future trends in emerging technologies.

Since the first report in 2002, the Horizon Report has been develped using a veritable Delphian study format for investigation. Each year, a group of about 50 advisory board members research and discuss emerging technologies to generate a list of technologies, challenges, trends and issues that are relevant to today’s education.

Each year, they identify a variety of technologies “to watch” as well as how soon we can expect them to be adopted. This “Time to Adoption” is usually broken into “One year or less, Two to three years, and Four to five years”

Here are some lists of what was listed over the past few years:

The 2009 Horizon Report:
One Year or Less: Mobiles and Cloud Computing
Two to Three Years: Geo-Everything and The Personal Web
Four to Five Years: Semantic-Aware Applications and Smart Objects.