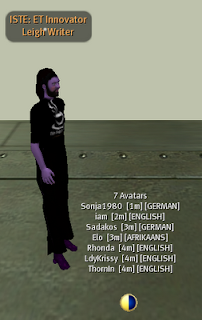 I have found some Language Translator programs in Second Life (SL) that remind me of the Universal Translator of science fiction lore (i.e., Star Trek and Dr. Who & ?)

There are two – The Simbolic Language Translator and the Free Translator by Ferd. Let me tell you how I found them . . .

A couple of nights ago, I was exploring in Second Life when I met a gentleman. He and I began chatting (only text). I noticed that it would take as long as 15-20 seconds for him to respond to me. Through conversation I found out that he was from Portugal and that he was using a translator. This translator took what he typed in Portuguese and translated it into English (I could not see his writing in Portuguese.) I would read his message in English and reply in English. The translator would convert my message from English to Portguese so that he could read it.

Pretty Tricky. He told me that this was the Simbolic Language Translator and directed me to where I could download it. I beamed over the Simbolic site and downloaded it. (I m

ust warn you that this site is not in the “best part of SL” so be forewarned that you may see some strange stuff there.) This language translator is a HUD (Heads-Up Display) so I had to “wear” it for it to work. Once I donned the translator, a small control panel appeared in the upper left corner of my screen. It enabled me to select the language that I was speaking and then the language of the person to whom I was speaking. Engaging the appropriate settings, I tested this out with my new Portuguese friend and it worked quite well. There were a few times when the literal translation didn’t work too well but “it’s only a computer.”

Today, I was over at the Simbolic site to find out more about it. There are probably a half dozen avatars speaking an assortment of languages. I realized the primary limitation in the Language Translator. Before I could converse with another person through the translator, I needed to know what language they spoke so that I could make the appropriate settings. Before I had much time to think about this, I met Ferd Federix. Ferd told me that he had developed an even more sophisticated translator. This is the Free Translator.

I wanted to test this out, so:

How do they do this? You guessed it – Google. (Don’t they run everything? =-) Ferd told me that both of

the language translators are running the text through the Google translator. I don’t know much about this but he said that Google offers APIs for developers to use their tool. (You might also notice that I have installed a Google translator for this blog. Look in the right column and you will see a gadget that will translate this page into any of 35 languages.)

This is an amazing advance in SL communication. It builds a language link that can break down the language barriers that get in the way of humans communicating. It IS a literal translation and I wouldn’t use if for international negotiations, but these translators can further connections between people around the world.

SLURLs for the Second Life Translators:

Ferd Free Translator
Find the Orange Globe (you may have to turn around). Press your up arrow to walk towards the orange globe. Touch the globe (Right/Command click) and the translator will be placed in your inventory. It just happens. There is no text window saying that you have received it. Check your inventory for a folder entitled Ferd’s Google Translator Folder. http://tinyurl.com/freetranslator
(Updated 1/21/09)