TED ROCKS!!!!
The TED Talks is a conference that covers for Technology, Education and Design. This is the opportunity for some of the greatest minds on the planet to get together to share their visions, accomplishments, and ideas. It began as a single event in 1984 and turned into an annual event in 1990.

Since 1990, TED has accrued hundreds of videos of these <18 minute presentations. I must admit that I like to watch these more than anything I can find on TV (except maybe West Wing). These videos range from education to architecture to global warming to world hunger to ????  The list seems endless.  They continually challenge your ideas and give birth to new ones.
Over the past couple of years, TED conferences have been held around the world. These are called TEDx conferences. As of 2010, there have been at least 60 of these TEDx conferences held. India, New York, Rotterdam, Sydney, San Francisco, Boston, Tokyo, Shanghai, Des Moines have all been venues for a TEDx event. (Here is an ever-increasing list of these events) I even heard a rumor that recently, when a group of creative people were stranded in the Heathrow Airport in London because of Icelandic volcanos, they even presented an impromptu TEDx. Don’t know if there were any videos taken of that but it would have been interesting.  NOTE: Robin Galloway noted in the comments (see below) that the Heathrow TED was called TEDxVolcano and that the videos can be found on the TED Blog.

Notice that I mentioned Des Moines, Iowa as a site for a TEDx. On May 16, 2010, I had the wonderful opportunity to attend the first TEDx in Des Moines. As you can see from the list on their website, we had Superintendent Carver, Christian Renaud, Dr. Sue Savage Rumbaugh (see below), Fernando Aveiga, and Charlie Wittmack & Andy Stoll.  I will do a more complete report on this when they get their videos online.

Here are some videos about education and learning that I wanted to share with you. There are many more in this field that I liked and I will share them at a later date, but this is the beginning of a series. 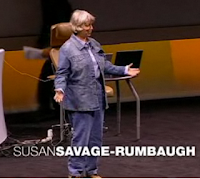 Apes by Dr. Susan Savage-Rumbaugh
You will notice that I am beginning with a video on Apes. This doesn’t have much to do with schools, but it has a great deal to do with learning. Consider what you are seeing and what it says about the learning process in both human and non-human primates.
Schools Kill Our Creativity by Sir Ken Robinson
Sir Robinson is a strong proponent of rethinking school.  He doesn’t propose that we should update it. He believes that is should be completely redone to nurture instead of destroy our children’s creativity.
Bring on the Learning Revolution by Sir Ken Robinson
Continuing with his revolutionary perspective, Sir Robinson, advocates nurturing students’ strengths. 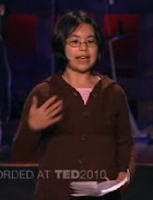 What Adults Can Learn from Kids by Adora Svitak
A 12-year old lecturing adults to take children more seriously. Adora has been lecturing since she was 7 years old and lectures throughout the world about life from a child’s perspective.

Life Lessons Through Tinkering by Gever Tulley
Learning doesn’t have to be about books. A great deal of learning has to do with developing ideas and turning them into reality by tinkering. 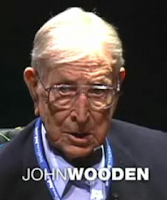 True Success by John Wooden
The winningest basketball coach in history, John Wooden shares his definitions of success and learning.

I hope that you have enjoyed these videos.  What are your favorite TED talks?  What should I be watching?

0 thoughts on “5 TED Talks about Education and Learning”