Time in New Orleans is passing quickly. Funny how time flies when . . .

Today we had an opportunity to visit Xavier University. Cliff Highnam has had a connection with their communication program for a few years and had an opportunity to speak with about 15 of their communication student group about the communication program at UNI. This was a group of young women who seemed quite interesting in the field and there were a number of good questions about the field and the UNI program. I was also impressed by the self initiative that the club members exhibited. They had a raffle that they were running to raise money for their club’s activities. It’s good to see such motivation.

While talking with our host, Nancy Martino, I asked about someone who I might be able to contact in the Xavier education program. She suggested that I speak with the chair of the Education division, Renee Akbar. I made a 1:30 appointment and we had an opportunity to talk about our programs. She said that while they don’t have a graduate program or special classes in technology, they are trying to emphasize using technology to support learning in their methodology classes. Good to hear.

I shared our educational programs with her and provided her with a selection of our informational materials. I also told her that I had a big bag of these for the Xavier Grad Fair tomorrow and that I would like to leave a number of these materials before I left. I suggested that it would be a benefit to all if we would make some connections between their school and UNI. Hopefully this would involve our students connecting with one another as part of the curriculum. Great opportunity for them to experience the online opportunities that they can have in their own classrooms in the future. I was specifically thinking about connecting them with my students in Classroom Computer Applications next semester but I am more than happy to share the wealth. 🙂

After the work was done, Celeste and I went on a 2-hour tour of New Orleans. I have been here before but taking a formal tour of the city is the best way to get an overview of our surroundings. It began by going down to the riverfront and sharing the history of New Orleans. 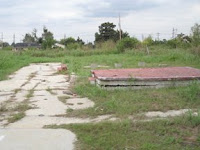 The bus fell silent as we drove into the 7th ward and the tour guide told us that the acres of weeds and rubble that surrounded us used to be a bustling community of homes. We asked about the rebuilding that was supposed to be happening there and the guide replied with “we don’t know.” We drove through the many neighborhoods of New Orleans. We could see the waterlines on houses that were 15 feet high. This is the reminder that this could easily happen again.

The greatest shock was seeing the levees that were installed. From a 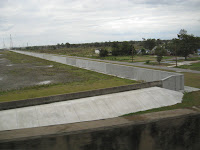 distance they didn’t look too thick nor very high. National Geographic doubts how substantial they are as wel. I just hope that the controlling powers don’t skimp on the necessary improvements so that these people can work to rebuild and know that everything possible is being done to protect them from such a tragedy again.

The most interesting part of the tour was bumping into a couple (and their son) who live in La Canada, CA. La Canada is where I was raised and finding someone from there visiting New Orleans is a surprise. To top it off, she spoke of a Dick Schmidt in La Canada and it may turn out that this guy was the patrol leader for my Cobra patrol when I was in scouts.

We took our own tour of New Orleans at night as Cliff, Celeste, Doug and our new arrival, Helen took to the streets. We began by having a wonderful dinner in an Indian Restaurant (ever notice how everything in New Orleans leads to eating?) We then toured the city and found a great blues place.

Tomorrow we go to GradStar at Xavier University. Cliff and I scouted out the location today and it is a large ballroom. They say that 80 schools will be represented and there will be 300-500 students. We look forward to having another successful opportunity to meet and greet students.