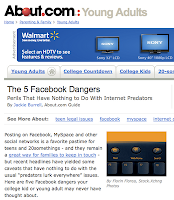 “Wow Man!! I was SOO wasted!!”
“This job is really boring.”
“I think that I am getting tired of my girlfriend.”

These are all phrases that can get people into BIG trouble when they share them on FaceBook. FaceBook is a great way to communicate with your friends and share what’s happening in your life, poorly selected photos and descriptions of your adventures can cause SERIOUS problems in getting jobs, being admitted to college, or even being sentenced in the courtroom.

Jackie Burrell‘s article, The 5 Facebook Dangers, in her Young Adults About.com column, provides an important list of ways that poor choices in postings can affect their futures in school, jobs, and court prosecutions.

Students don’t realize how much their presence on the Web will affect their futures. Every semester, I discuss this issue with my university students and the fact anything they post on the web will “be there forever.”  They see their social networking sites as great places to share things with their friends, but they don’t consider the fact employer and admission offices search the web to find out information that isn’t conveyed on their job/school applications.

Be careful what you post because it just might come back to haunt you in the future.

BTW, related to Facebook but unrelated to what I have been discussing, I just found some research by Aryn Karpinski reported in April, 2009, compared the grades of students who use FaceBook to those who don’t. They surveyed 219 students from Ohio State University and found that Facebook users in the study had GPAs between 3.0 and 3.5.  Students in the study who didn’t use FaceBook had GPAs between 3.5 and 4.0. They also found that FaceBook users spent an average of 1 – 5 hours a week studying and non-users studied between 11 – 15 hours.

It should be noted that this research DOES NOT find a causal relationship between low school performance and using FaceBook. It merely found that those who used FaceBook tended to have lower grades and study less. Chances are that if they didn’t use FaceBook, they would have found other distractions instead of studying.

Another question is how can university students have a 3.0 GPA average with only 1 – 5 hours of studying per week?  I have plenty of ideas about that, but that deserves another posting.